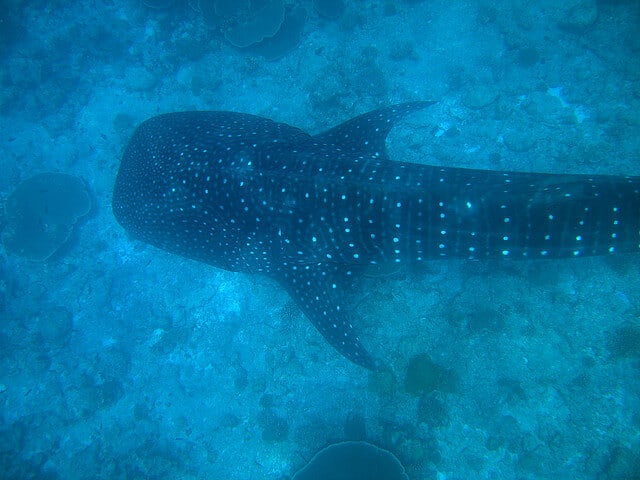 Swimming with Whale Sharks in the Philippines

Imagine you’re in the deep blue ocean with mask and snorkel on, floating on the surface. You’re looking for something but it’s not there. You strain your eyes looking left and right but all you see is the dark ocean. You hear someone shout “LOOK DOWN” and you turn your head just in time to see a metre wide, open mouth coming towards you. You know you’re not in danger and yet your body can’t help but scream. As you watch wide-eyed, pumping full of adrenalin, this giant creature, dark blue with white spots and about the size of a bus glides gently past you.

This is what happened when I went swimming with whale sharks, the largest living fish in the ocean.

There are many reasons why you will want to visit the Philippines and swimming with the whale sharks of Donsol, Philippines should be high up on that list.

Not at all. Whale sharks are filter feeders. They feed by taking in large amounts of water through their wide, open mouths and filtering it for plankton and small fish. You’ll also be pleased to know that they have no teeth!

Sharks in general aren’t a big threat. Out of the 375 known shark species in the world only 12 of these are considered dangerous to humans. According to the National Geographic Magazine shark attacks kill an average of 5 to 15 humans a year, and none of these attacks can ever be made by a whale shark – remember, no teeth. 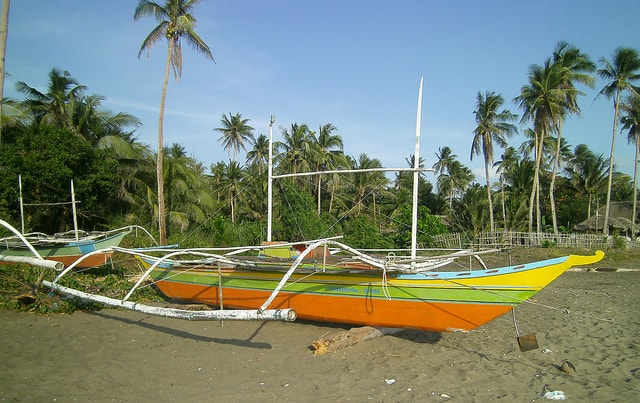 When we made our way to Donsol, we knew we were in for a treat but nothing could prepare us for the thrills awaiting us the next morning.

We had been in our boat or Bankga for about 10 minutes when our guide told us to get ready. We quickly put on our masks and fins and on the word ‘go’ we jumped into the sea ready to get a glimpse of these gentle giants. Our first sighting was of a tail disappearing in the distance, which was pretty anti-climatic after all the excitement in the morning. Part of me thought that 3 hour trip would be made up of fleeting moments like this. Oh how wrong I was!

Our second sighting provided our first real encounter with the whale sharks. No words can capture the awe I felt as I floated a few metres away from this beautiful creature. I swam as fast as I could, to stay in parallel with the shark and I could feel my heart hammering with excitement and exertion.

On our third encounter the shark swam right below me and for a few minutes it felt like there was just me and this magical creature swimming in the ocean. It’s a memory I treasure and return to savour over and over again.

We had 8 encounters in total that day, and with each one requiring us to swim furiously to keep up, we ended up completely exhausted by the end of the 3 hour trip. As we left the boat, Paul and I both had huge smiles on our faces, we knew that this morning would be one of the highlights of our entire trip. 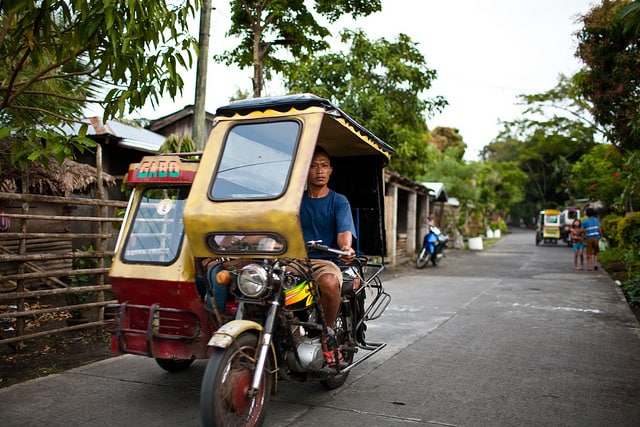 We saw whale sharks in Donsol, which is on the south side of Luzon, the main island of the Philippines. It’s about 9 hours drive from Manila.

We recommend this place because they encourage whale shark watching in a responsible way. There is an enforced code of conduct for both tourists and operators which means that harmful practices, such as feeding the whale sharks, or driving the boat too close to the sharks are not allowed. Only two boats are allowed to follow per whale shark so as not to stress it. We have heard reports where boats have bent the rules when there were very few whale sharks about so it’s important to ask about this.

In the past fishermen used to hunt these creatures for a living. The belief that these creatures were dangerous further added to their slaughter. This all changed when the locals discovered that they could make a better living by taking tourists out to view the whale sharks. The new activity helped the town flourish, providing opportunities for the locals to open B&B’s and restaurants for the new influx of tourists. It’s such a great outcome when locals and nature can both benefit from visiting tourists.

We wouldn’t recommend you go to Oslob in Cebu where fishermen feed the whale sharks to attract them. This practice makes the whale sharks dependent on humans, meaning they lose some of their ability to survive. Worse still, the boats in Oslob drive too close to the whale sharks at times hitting them and injuring them. There’s also a picture circulating of a person riding a whale shark which is likely to stress the animal. There are some very good reasons why we’re not fans!

When should we go? 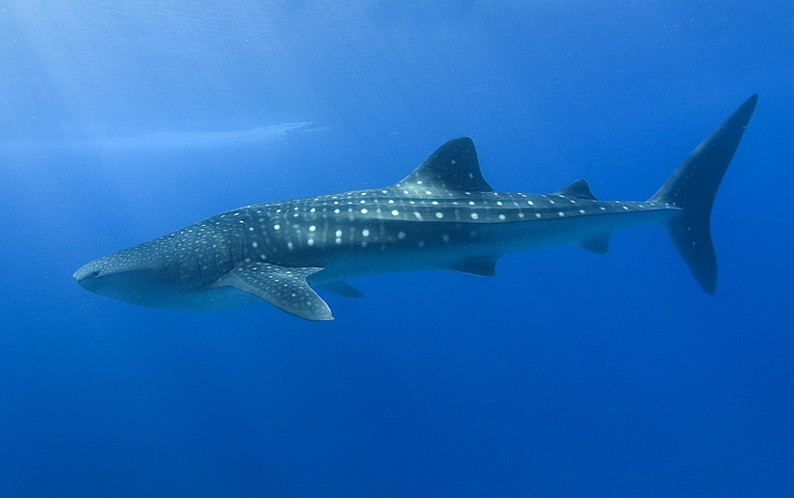 The whale shark season roughly lasts from December to May, with February to April generally offering the best sightings. In the past years the sightings have dropped so it would be useful to do some research and double-check with operators closer to your visit.

How do I get to Donsol?

There are a couple of options to get to Donsol. You could fly to Legazpi (1 hr) and make your way to Donsol which is roughly 2 hours. While this is the quickest way it also leaves the biggest footprint.

The other option is to take a bus. Buses are very comfortable and can go directly to Donsol (10 hrs), or Legazpi. You have the option of taking an overnight bus, which is comfortable enough for sleeping. Just be aware that the a.c. gets VERY cold, so have a warm jumper at hand.

If you stop in Legazpi, take a taxi to the bus terminal where you can take a Jeepney or a minivan to Donsol. It’s a 2 hour ride.

If you’ve enjoyed this post we’d love it if you shared it with your friends.

11 reasons to visit the Philippines

Visiting Bohol Island in the Philippines

Volunteering opportunities in the Philippines

P.S. Most responsible travellers who read our blog sign up for regular updates. You can join them by filling in the orange box below.

*All images from the Creative Commons

Karen is a trained psychologist and coach. But really she’s an adventurer who believes travel can be one of life’s best teachers. She writes to inspire you to take the leap and travel in a way that is memorable and meaningful.