LEECH!!! Screamed the girls ahead. As I slowly followed in their footsteps, lo and behold, there was another Leech doing its demented dance like a raver who has taken one too many ecstasy pills. I gingerly walked around it, hoping that it wouldn’t latch on to me. This was about the millionth leech we had come across and we still had hours to go before reaching our destination. Don’t get me wrong, we knew we would come across these blood sucking fiends. Before setting off on our trek, we sprayed so much insect repellent on our socks, boots and trousers we had more chance of getting skin burn than a bite from our raver friends. 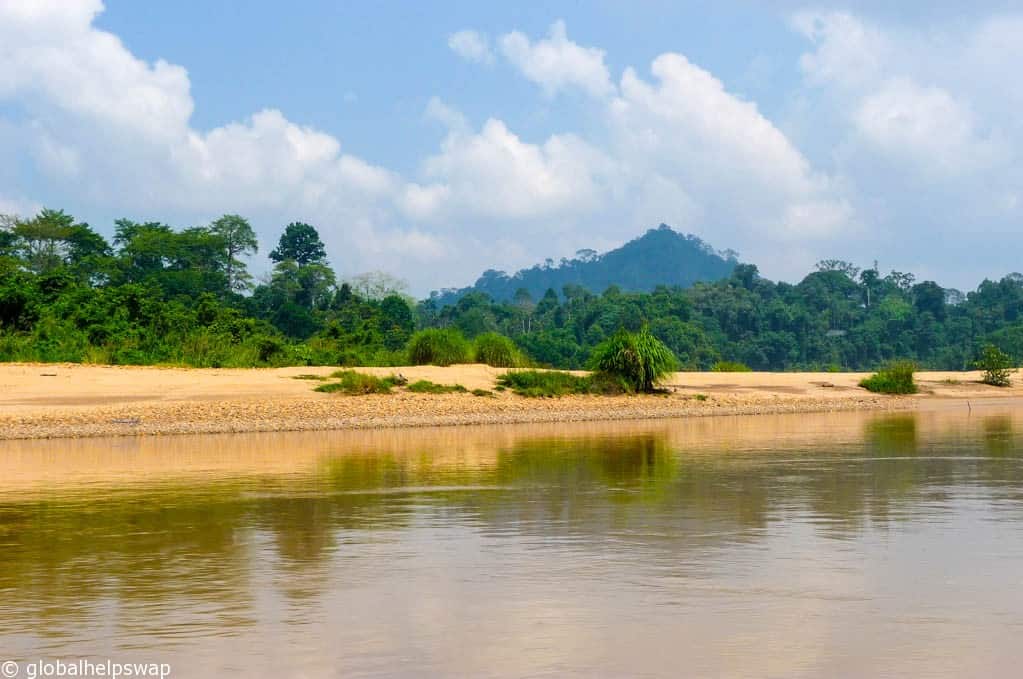 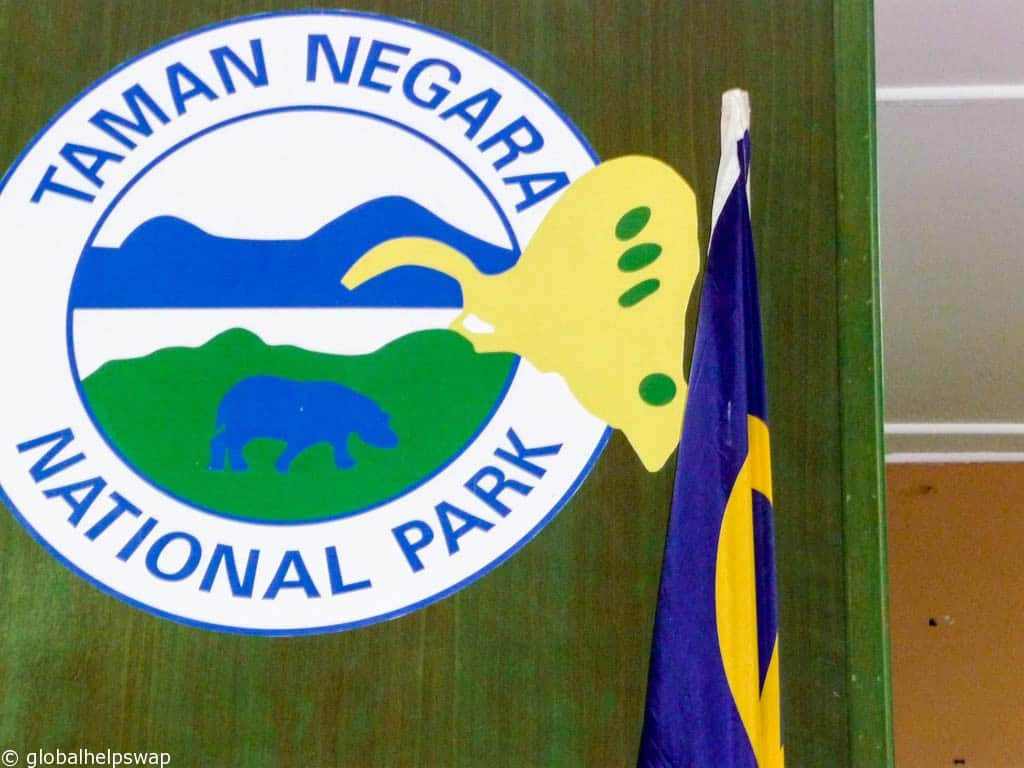 Let’s sleep in a cave! It seemed like such a good idea the night before. Sitting over a few beers in the world’s oldest rainforest, the idea of getting back to our roots felt natural. We met two other gung ho travellers who loved the idea too (they also had beers.) All we needed was a guide. We found one in the bar we were drinking in. It turned out he lived in the bar. When I say lived in the bar, don’t get lofty ideas of someone living in an apartment above a pub, he literally lived IN the bar. In a hammock. In a non-travel situation that would have rung alarm bells. For us, it just added more romanticism. 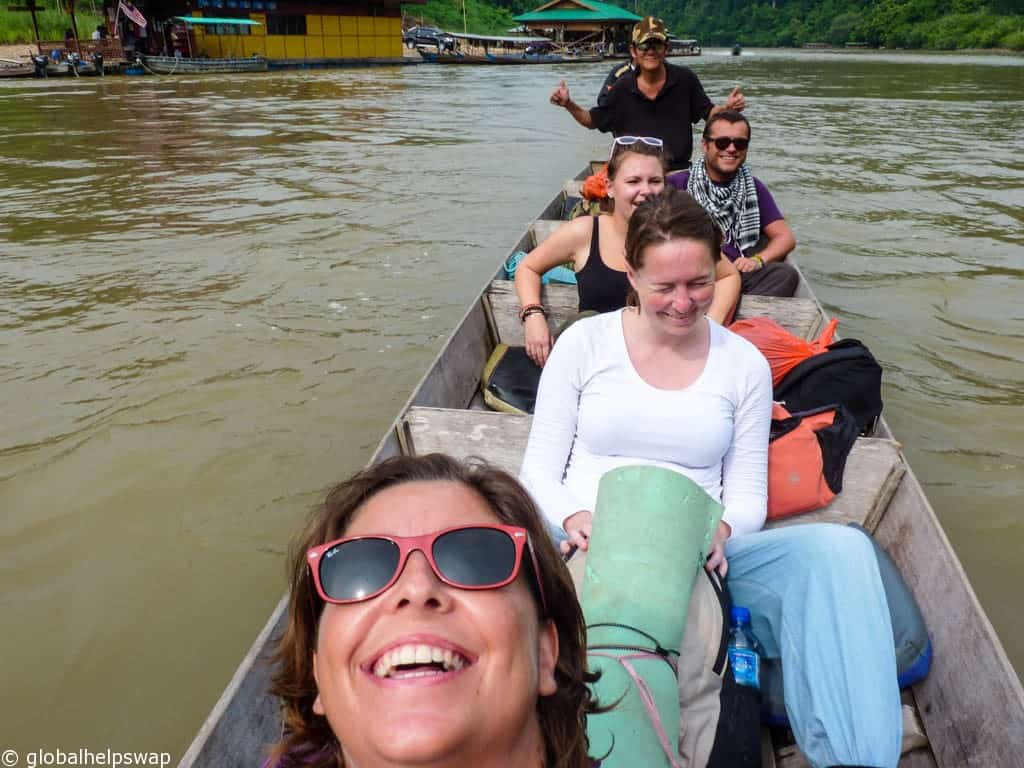 The next morning we set off for our cave with a lovely boat ride down the river. Foolishly, Karen and I imagined the whole day would be like this. Oh no. We soon realized how unfit we were and why they call rainforests tropical. The trek involved a lot of climbing up slippery slopes and sliding down even more slippery slopes. Even though all four of us had good walking boots we all ended up on our backsides. Amazingly, our guide didn’t slip once even though he was wearing crocs! The heat was incredible. By this point we had been in Asia for 11 months so we had gotten used to sticky days but the rainforest took it to another level. 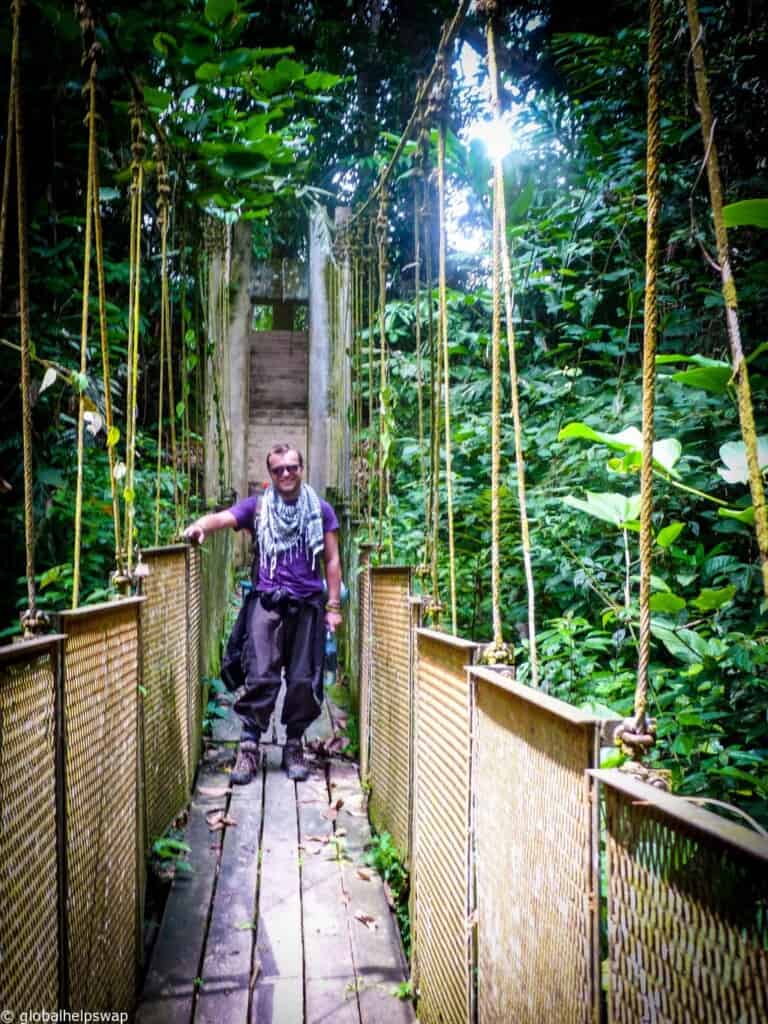 We wearily carried on with the trek, dodging the leeches and listening to our ex-junkie guide. Oh, didn’t I mention that our guide used to be a heroin addict / smuggler? Yep, the man we had trusted with our lives used to inject heroin into his veins. When he found out our two companions were from Holland, he casually mentioned that he knew Holland well as he spent time in prison there. I am not sure how well you know a country from its prison system but hey, you do get to meet the locals!

He gave up heroin when the product wasn’t as good anymore. That’s a consumer taking action right there! We could learn from this man. All joking aside, we couldn’t have had a better man to guide us. He knew the rainforest like I know London. He often would trek for days by himself with no food or water. After giving up the drugs, he wanted to reconnect with nature, hence why he lives on a hammock at the edge of the rainforest. He told us about a time when he was guiding this Swiss couple who were both in their 70’s. They did the same trek as us to the cave. An overnight tropical storm left their path back to civilization under 5 meters of water. Our guide had to take one person at a time to higher ground. He literally dragged them through the water for around 30 mins, then swam back and had to do it again. After hearing that, we knew we were with a man who knew what he was doing in the wild. A bit like Bear Grylls, but skinnier because of the drugs. 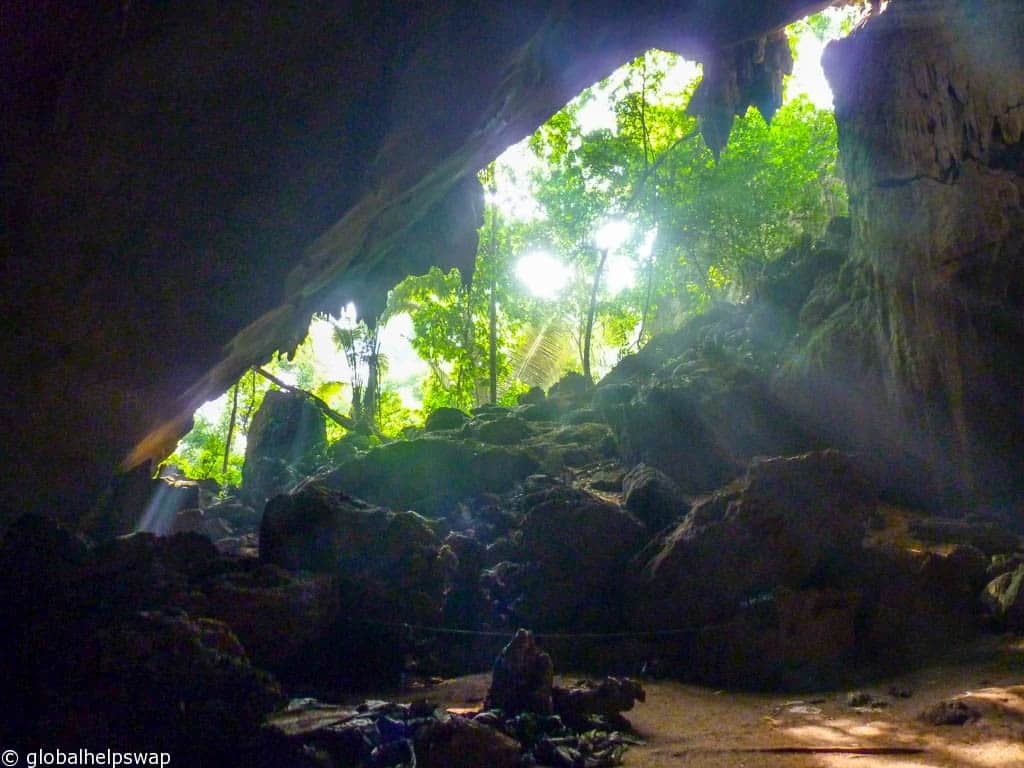 After trekking for 10 hours we finally reached our destination: The Cave. I laughed to myself thinking I wouldn’t have done this trek for a 5 star hotel but I did it for a cave. We set up camp in around 5 seconds flat. How long does it take to lay a sleeping bag on the floor? Our guide started a fire to cook our dinner and we took in our surroundings. Above us was a colony of bats to keep us company during the night and on the ground was the biggest ants we had ever seen. The insect repellent came in handy again as we sprayed around our sleeping bags to keep the ants at bay. I felt like I was in a horror movie spraying my circle to keep the evil spirits out. 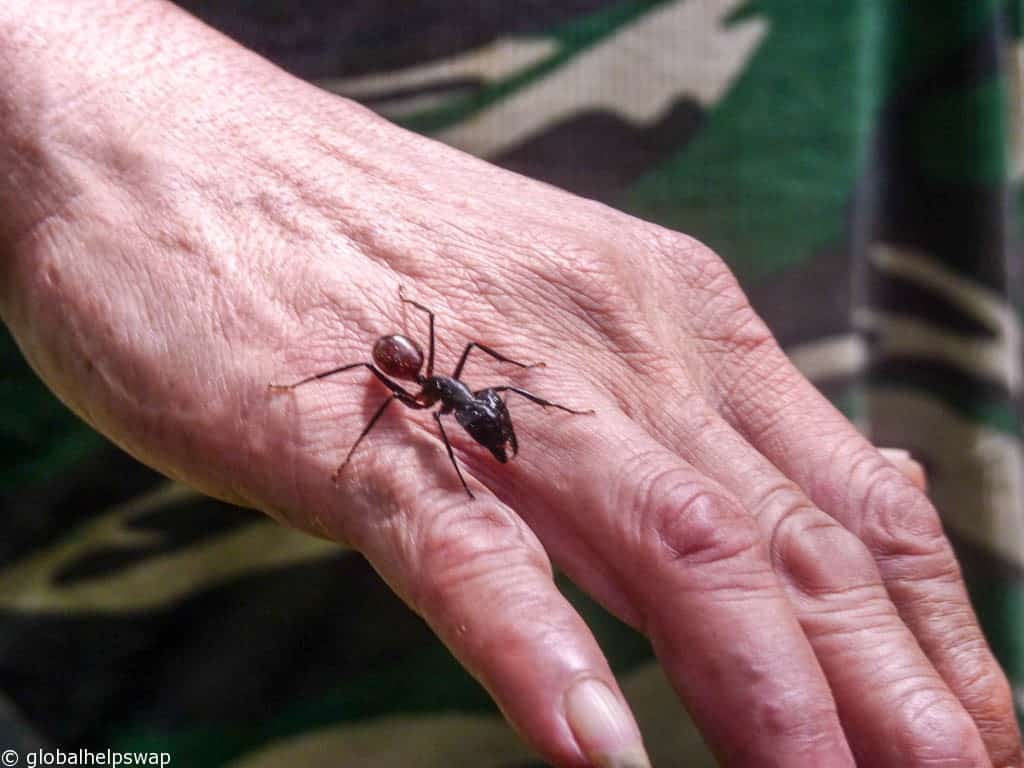 During dinner, our guide told us to leave a bit of food. We thought we didn’t have enough for breakfast but it was for something a lot more special………..? 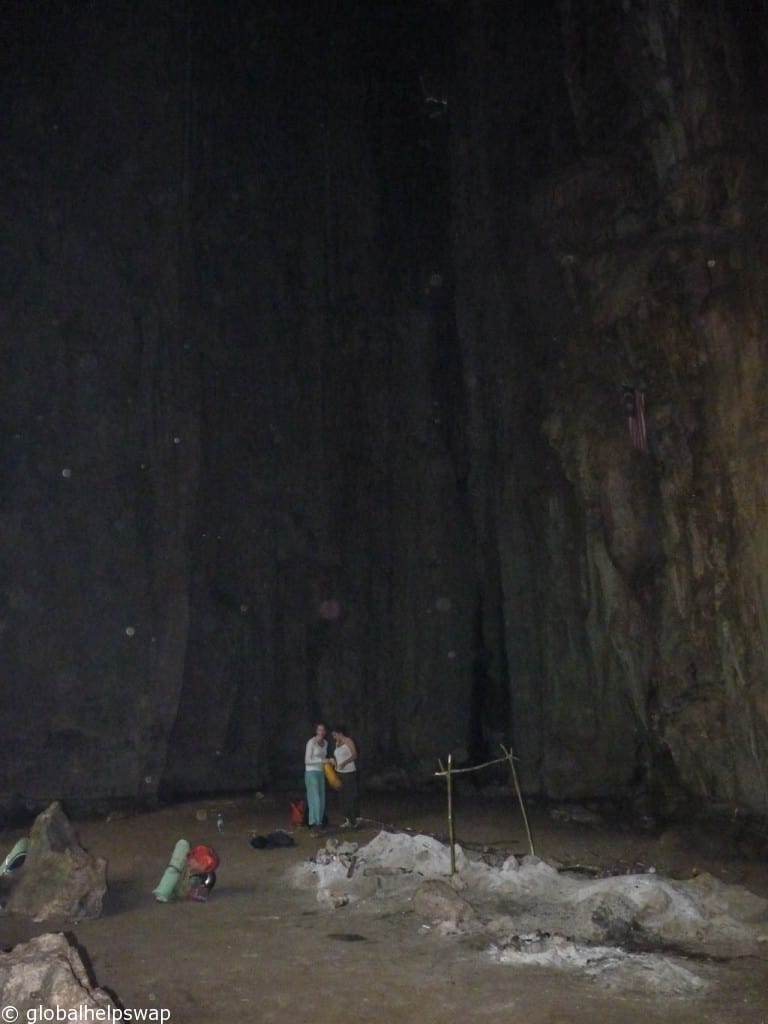 We all slept like babies. All four of us are city people, and yet we felt so at peace in the rainforest. It was almost like our subconscious was telling us welcome home. Even though we knew there were wild animals out there, we never felt threatened. We truly did reconnect with our roots. No matter where you live on this planet, you need to expose yourself to nature. Even if it’s just visiting your local park, being next to wildlife is nourishment for the soul. 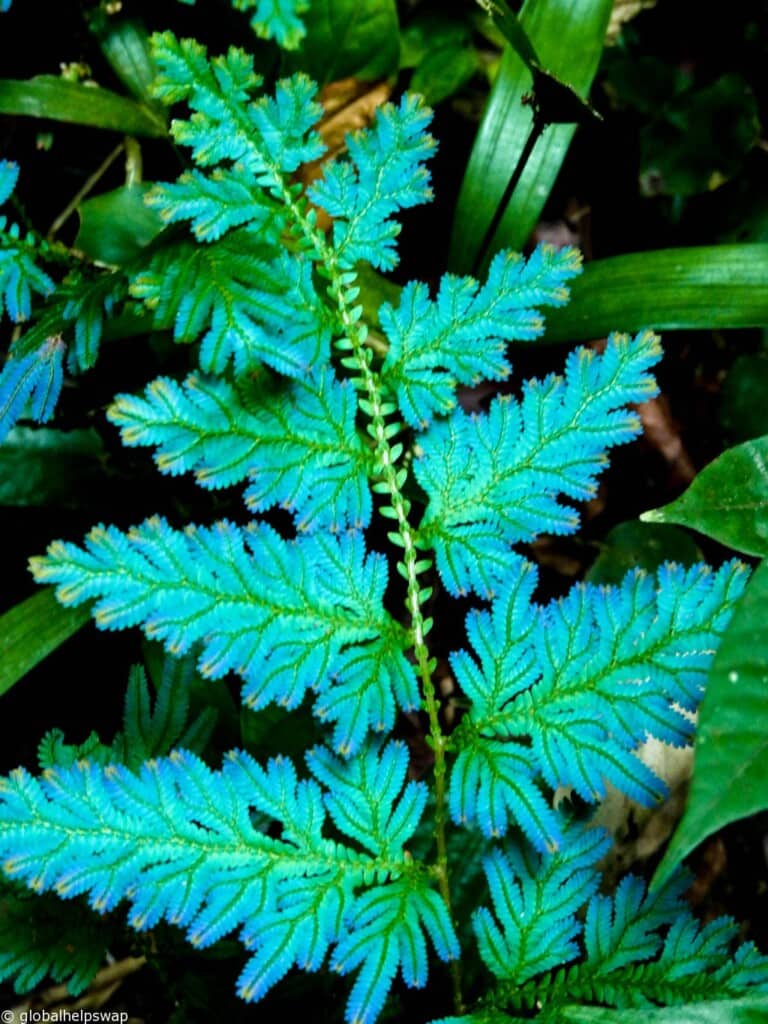 We left the food out overnight for something special indeed. The only time we woke up from our sleep was when a jungle cat came into the cave to eat what we had left for her. It was truly a magical moment. Again, we didn’t feel threatened by her presence, just awed.

The only scream of the two days came when I flicked a leech from my foot onto Karen’s stomach but that’s another story!