We love music. Along with food it’s one of the things we love discovering on our travels. We rarely buy mementoes when we are on the road (mainly because we hate carrying too much stuff) but we always seem to purchase a cd from a local band we have discovered. We have eclectic tastes too. From the chilled out vibes of a Balinese band to the funky beats of Malian music, you will find them all on our ipod.

However, there is no country that has affected popular music more than my own – England. From the recently deceased David Bowie to the guys that changed music forever (The Beatles), England has produced some amazing music for such a small island. Throw in the Punk movement, Indie, Britpop, The New Romantics and the Rave scene and you start to get the idea.

Almost all artists eventually move or play in London with Camden Town being a major focal point. Imagine my delight when I was recently invited on a tour with Undiscovered London to discover the music legends of Camden. However, this was no ordinary tour. Not only did we have a great guide with us explaining the history of what we were seeing, we also had a musician blasting out hits of the artists we were learning about. How could I refuse? 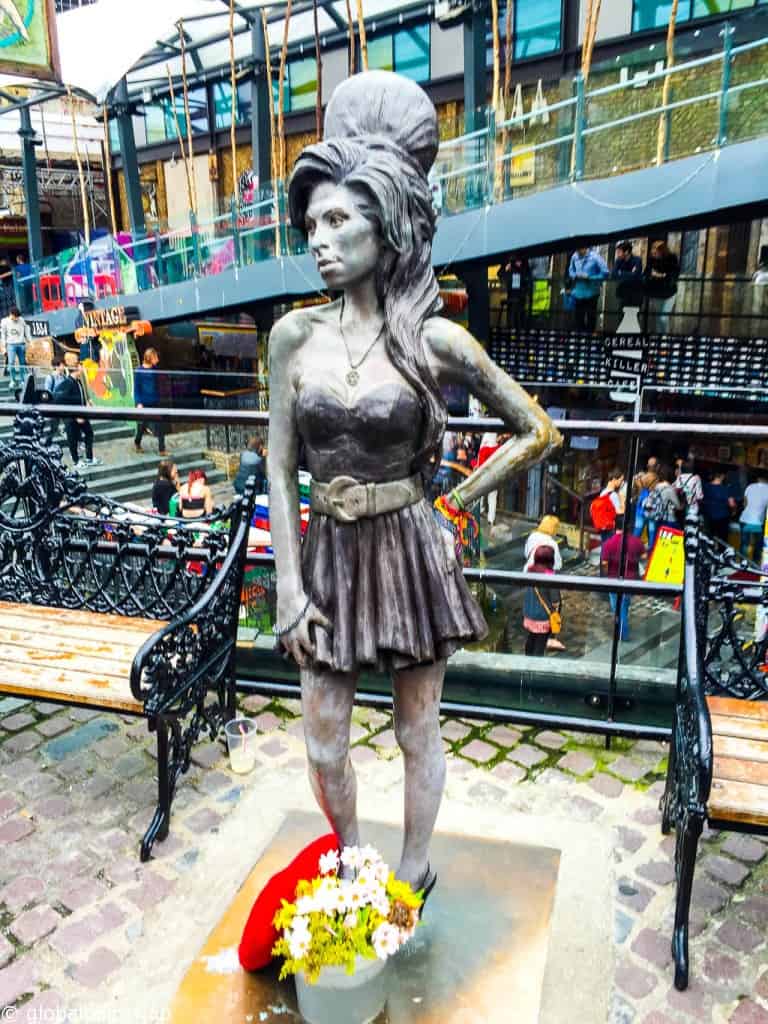 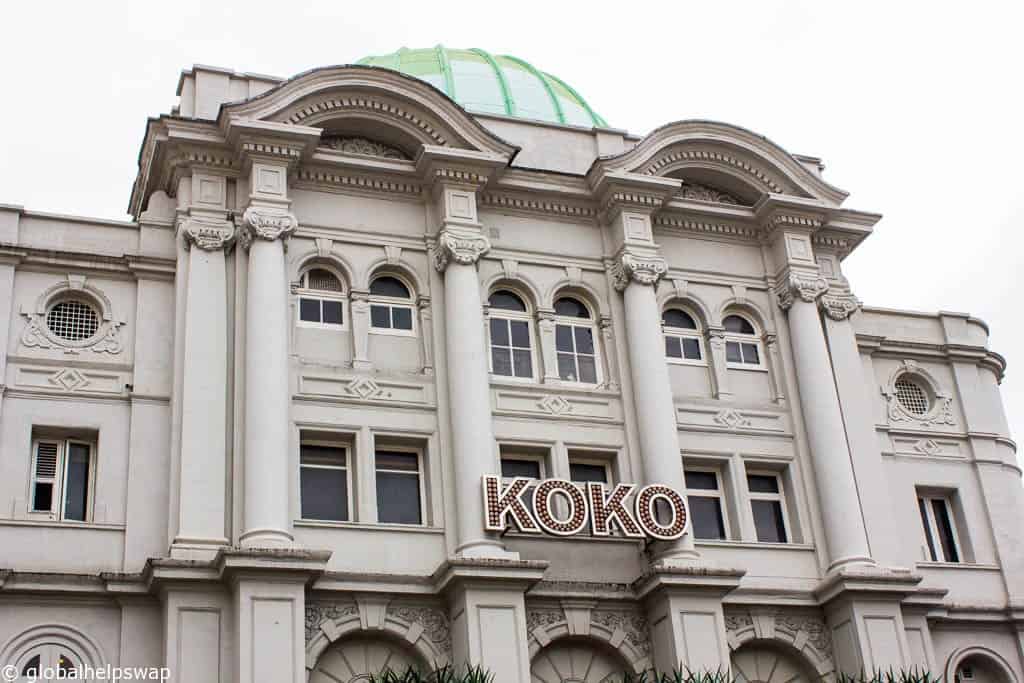 I thought I knew my history but from our very first stop I realized I had a lot more to learn. I have been to Koko but had no idea the significance of the place. It originally opened in 1900 by a famous actress of the time called Ellen Terry. Over the next century it held variety performances from famous performers including Charlie Chaplin.

At the beginning of the 20th century the place became a cinema until it closed in 1940 during the war. In 1945, the BBC brought it and recorded various programs there, one featuring The Rolling Stones. By 1970 the name of the venue was called The Music Machine. It basically became the home of Punk with the likes of The Sex Pistols and The Clash putting on legendary performances.

In 1982, the name had changed again to The Camden Palace. This is where The New Romantic Scene found a home and all the coolest kids in London would flock to the venue. Grace Jones used to fly back to London just to attend the parties! The Eighties saw performances from the Eurythmics, the Cure and the first UK show from a rising star known as Madonna. Not forgetting, of course, those Nutty boys of Camden Town – Madness.

In the 90’s the venue moved with the times and was a dance music venue. More recently it has gone back to what it does best with live performances from Noel Gallagher, Kasabian and Coldplay. This was only our first stop, so I couldn’t wait to discover what other venues had in store. 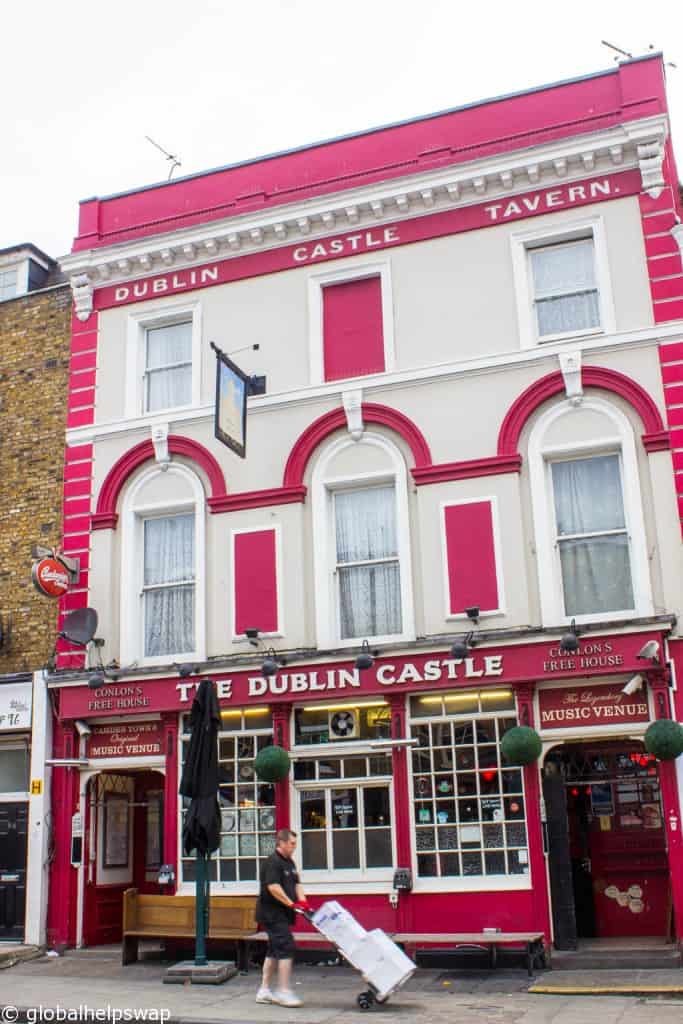 In the 1800’s Camden was just fields owned by the Earl of Camden. It had a few farms but it was mostly left empty for people of the city to enjoy. When the industrial revolution began, Camden began to change dramatically. Almost all the goods from the north ended up in Camden because of the nearby canals. This brought workers from all over the United Kingdom to settle and work in Camden. Unfortunately, the “United” part of the United Kingdom was hardly in evidence as the different groups would get drunk and fight on a nightly basis.

To help stop this, each group was given its own pub. The Dublin Castle (above), The Edinburgh Castle, The Pembroke Castle and The Warwick Castle. An ingenious way of keeping the groups apart if you ask me. The band Madness began in The Dublin Castle and Amy Winehouse worked there for a while. She used to pour pints for customers during her gigs! Good old Amy. Other notable performers to grace the sticky floor are The Killers, Coldplay, Blur and The Arctic Monkeys. 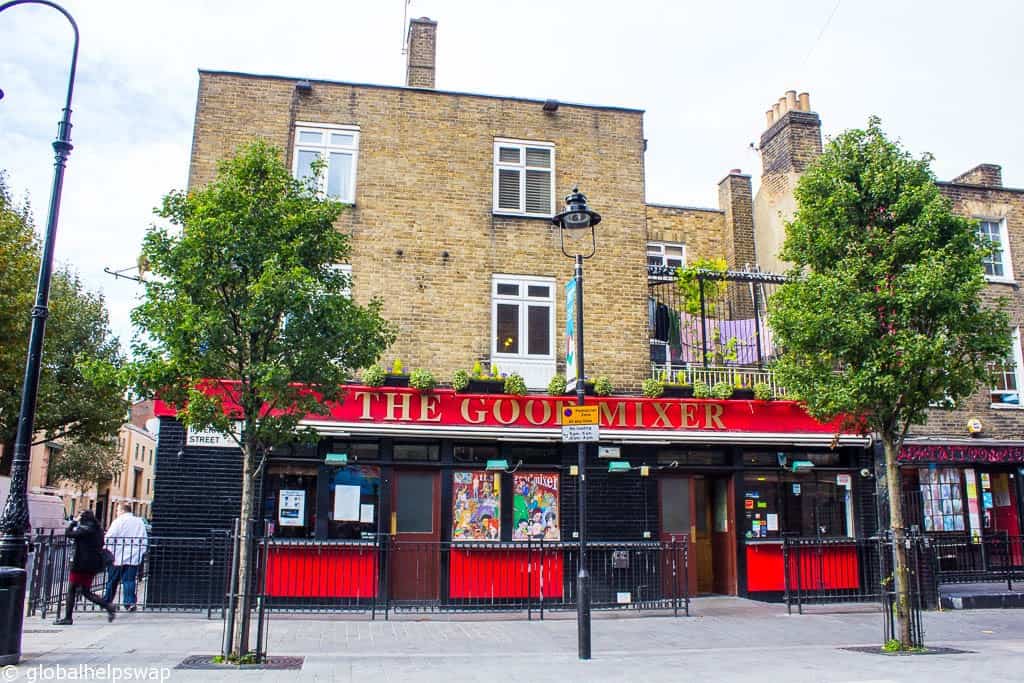 The Good Mixer was where any respecting Britpop band hanged out. Both Oasis and Blur used to drink there and rumour has it that their famous feud began in this very pub when one of the Gallagher’s said to Graham Coxon, “nice music, shit clothes”. The bar still has live bands on every week. 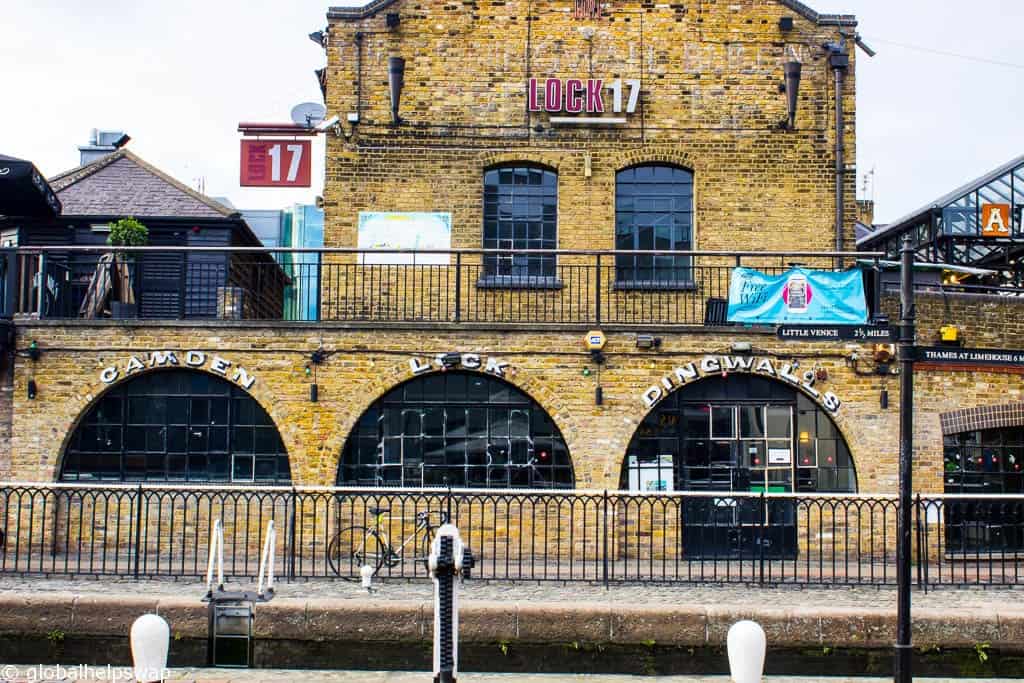 Dingwalls is another venue I have frequented without knowing its history. Britain’s first punk band (Gonzalez) played here and it soon became the home of punk like the Good Mixer was for Britpop. Recently Mumford and Sons and Foo Fighters have graced its hallowed walls. 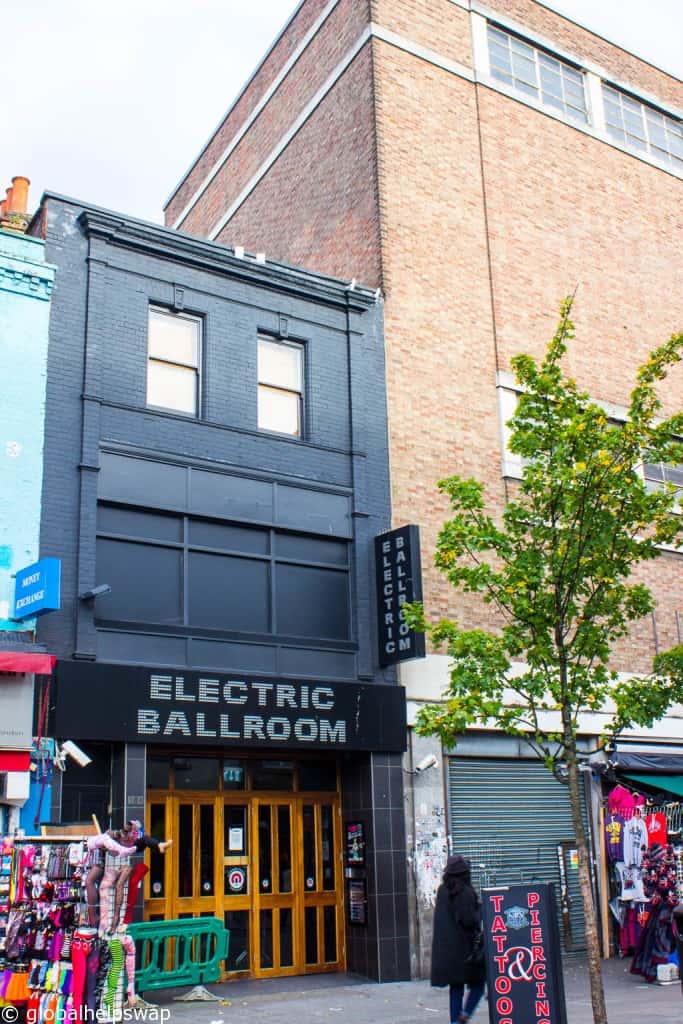 Like a lot of famous music venues around London this special place is threatened with closure. London Transport have been trying to redevelop the site for years and keep trying to move the venue. At the moment their plans are on hold but that can change at any moment. The way to keep places like the Electric Ballroom open? When you are in London attend a gig there! Show the authorities that this is a thriving venue with a rich history. 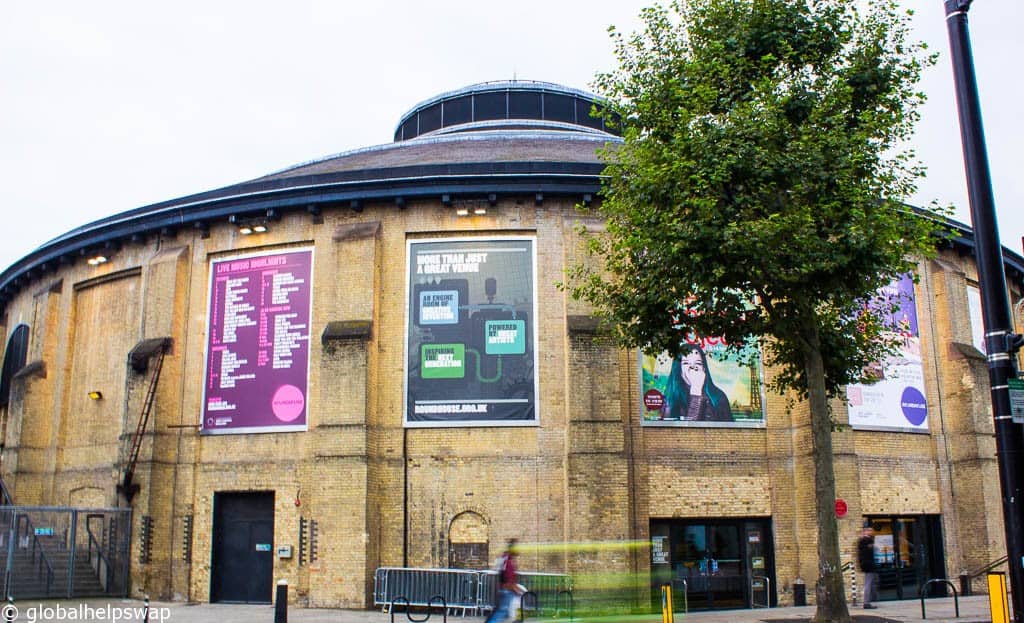 The Roundhouse is one of my favourite venues in London. I was lucky enough to recently watch Prince there with just 2,000 people. It was an amazing intimate gig, one that I will remember forever. The Roundhouse has had the likes of The Doors, Jimi Hendrix and The Who play there. In the 1960’s it hosted the legendary all night rave where a little known band called Pink Floyd played. Guests (who included Paul McCartney) were given a sugar cube laced with Acid as they entered. I will leave the rest to your imagination. This was the swinging 60’s after all. 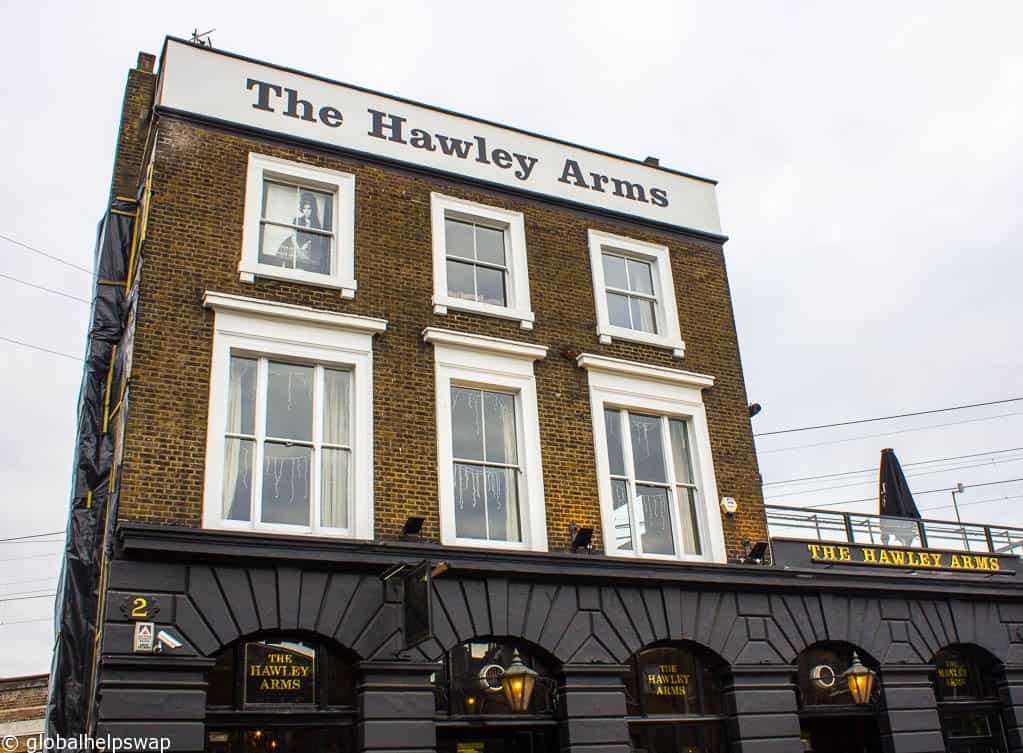 Like most of central London, Camden has not escaped gentrification. However, it is still the best place in the city for live music. Next time you visit why not pay homage to some of the greats and book a tour with the guys at Undiscovered London, it’s a great tour with knowledgeable staff and top music.

I was kindly invited on this tour from Undiscovered London. As always, opinions are my own.